I’m Breno, delighted to bring you some incredible news from Portugal.

We at Alti Wine Exchange are launching an exclusive, world-class vintage as the initial bottle offering (IBO) for October: Moscatel Kingsman Century Edition 1919, by José Maria da Fonseca (JMF) – arguably one of the most reputable Portuguese and European wine brands.

And to mark the occasion, we have an exclusive interview here with António Maria Soares Franco, executive board member of the company, showing how this highly exclusive launch came to be thanks to the family’s longstanding traditions in winemaking.

This very limited edition is born out of a partnership between JMF and Kingsman, the film series that started in 2014 with The Secret Service and went on in 2017 with The Golden Circle.

From 20th Century Studios, the prequel The King’s Man is set to be released in February 2021 – starring Ralph Fiennes, Gemma Arterton, Rhys Ifans, Matthew Goode, Tom Hollander, Harris Dickinson and Daniel Brühl, with Djimon Hounsou and Charles Dance – not to mention this outstanding Moscatel (watch the film’s trailer at the end of this article).

A delicious wine deemed ‘Sun in a bottle’

Back in the time the movie is set in, Moscatel was already loved by kings of France and the United Kingdom – having been famously deemed “sun in a bottle“, used as an exchange currency by overseas explorers thanks to its inherent quality, and awarded the most prestigious wine prizes as time went by.

But even if you have never met or sipped a Moscatel de Setúbal, it is never too late for so.

This top-notch Portuguese Muscat is an exquisite dessert wine produced in the Setúbal peninsula, a region south of Lisbon which was recognized as a D.O.C. in 1907. Its grapes are almost extinct, existing only in a small vineyard in Azeitão. This purple grape variety has an intense spicy aroma and a very concentrated and fruity palate (more information about Moscatel and Portuguese wines below).

Although there isn’t much more details regarding the 1919 agricultural year, this was surely a very good year, given the high quality shown by Moscatel Kingsman Century Edition 1919.

During the last 100 years, this wine aged in 500 liters of used oak barrels in José Maria da Fonseca’s cellar Adega dos Teares Velhos, in Azeitão. Now, the company has decided to fill 500 bottles of this brilliant wine to share with the world. 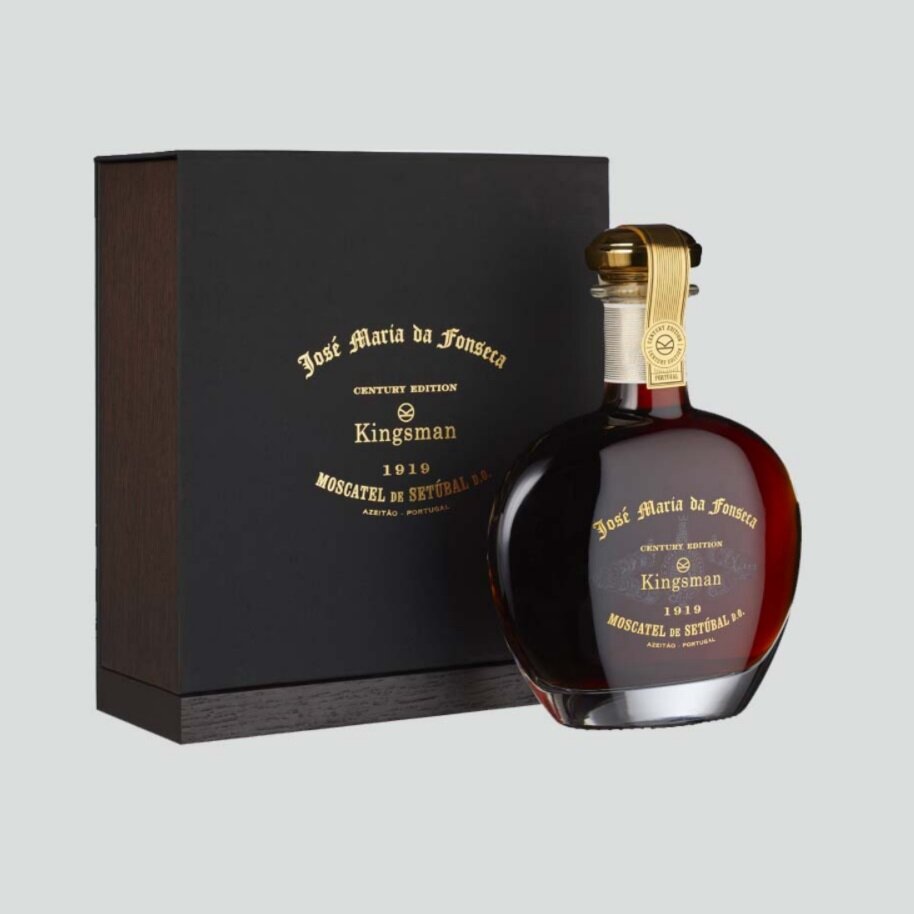 Apart from being one of the most respected Portuguese wine brands, José Maria da Fonseca is largely known also for being the pioneer of modern Moscatel.

Still to this day, tradition ensures that JMF keeps delivering the best. The family holds various sites throughout Portugal – each offering different climatic conditions, exposure to sunlight and type of terrain, which facilitates a range of technical options that maximize the qualitative potential of each wine.

Its largest vineyard area is precisely the one in the Setúbal peninsula, to the south of Lisbon. This sunny region is where the grapes that make the magnificent Moscatel de Setúbal grow and are turned into this unique liquorous wine.

This is a benchmark in Portuguese viticulture, both in terms of size and, essentially, because of the technical options it comprises at several levels: from trellising to tilling, the different types of vine treatment and non-use of environmentally harmful products, among various other features.

In order to give you more about this much special launch, and also the prospects and perspectives for the family behind José Maria da Fonseca, we spoke to António Maria Soares Franco, executive board member of the company – and part of its 7th generation.

Read the interview below.

Q: How did this agreement for the limited edition of this Kingsman 1919 Moscatel de Setúbal and its appearance in the film come up? Was it a branding proposal coming from producers?

Yes. It came from Marv Films, the owners of the Kingsman franchise. They are making this new film (The King’s Man) which basically tells the beginning of the agency that gives name to the saga. It takes place in the context of the end of the First World War, thus the producers wanted to add elements that were connected to that period.

They contacted us given that we were selling wines to the main royal houses in Europe at that time. Since we still have Moscatel supplies from that time, it was a fine match for us to make an exclusive product for the occasion.

Q: This is an international launch that should generate fairly good attention to Moscatel. What kind of consumer does the company expect to be attracted?

A more elevated consumer, more exclusive at an international level, since Moscatel de Setúbal is not (a fortified) as widely known as Port. It should be a more knowledgeable segment, which also is acquainted with José Maria da Fonseca’s Moscatels, which are pioneer and considered world class. In fact, a more exclusive, luxury niche market.