Where and when was wine created? The roots of winemaking

Why not some wine history in case you want some distraction from the worrisome developments regarding covid-19? I hope you’re staying safe — but now let’s also gain wine culture by meeting the birthplace and origins of winemaking!

I’m Breno, in Lisbon, where thankfully things are seemingly well – apart from the ever-growing concerns in respect to the current second wave of the pandemic.

Some months ago, I wrote some articles on fun facts about wine and about the differences between the Old and the New Worlds of winemaking, but I wanted to go back to what I had written about the oldest traces and roots of winemaking.

Why?, you ask me. Well, if you may recall, the oldest vestiges of a winery were found in Armenia.

So… my birthday was just the other day. To celebrate, my girlfriend surprised me with a dinner at an Armenian restaurant, where I got the opportunity to sip some interesting Armenian wines, including one made with 70% of pomegranate and others made from local varieties. So interesting and unique!

Who were the first people to produce wine?

Today I want to enjoy the occasion to dig further into how West Asia represents the true birthplace of wine, much before the Mediterranean traditions that we have been used to know.

Where did it all begin?, you ask.

The earliest traces of wine, with evidence that spans from 6,000 BC to 4,000 BC in West Asia, includes evidence found in the Caucasus Mountains, Zagros Mountains, the Euphrates River Valley, Southeastern Anatolia and other areas.

This area spans a large area that includes the modern nations of Armenia, Azerbaijan, Georgia, northern Iran, and eastern Turkey.

These earliest traces of wine fermenting point to the Shulaveri-Shomu, a Neolithic period people from the region that spans between modern Georgia, Azerbaijan and Armenia that, apart from other traits, became known for grape growing.

Even though fermenting is estimated to have led to winemaking in the Caucasus around the later Neolithic period thanks to the development of pottery (circa 11,000 BC), archaeological vestiges of this date only to thousands of years later, with organic compounds found in ancient Georgian pottery (Qvevri) that link to winemaking in what today is modern Georgia – dating back to 6,000 BC.

Check out our latest offers

China: a lesser known winemaking place from quite ancient times

Meanwhile, the use of wild grapes in alcoholic beverages in China has found scientific evidence dating back to 7,000 BC, even before the first traces coming from the Caucasus and Ancient Near East.

According to research by professor Gina Hames, the earliest wine or fermented liquor, came from China, pointed to pottery shards that show 9,000 year-old remnants of rice and grape wine in Jiahu village, Henan province.

The officially oldest known winery in the world, as we showed in the fun facts article, is situated in a cave in the mountains of Armenia.

With estimated 6,100 years old, the Areni-1 winery site was discovered between 2007 and 2010 and consisting of fermentation jars, a cup, press and bowl, and probably produced gallons for funerals.

According to Gregory Areshian, co-director of the excavations at Areni-1, the early wine produced in the Armenian cave seemed somewhat comparable in taste to unfiltered merlot.

What is even nicer is that the surrounding Areni village is still quite known for winemaking, making red wines with a local ancient grape also called areni – arguably the most cherished variety from this southern Caucasus country. 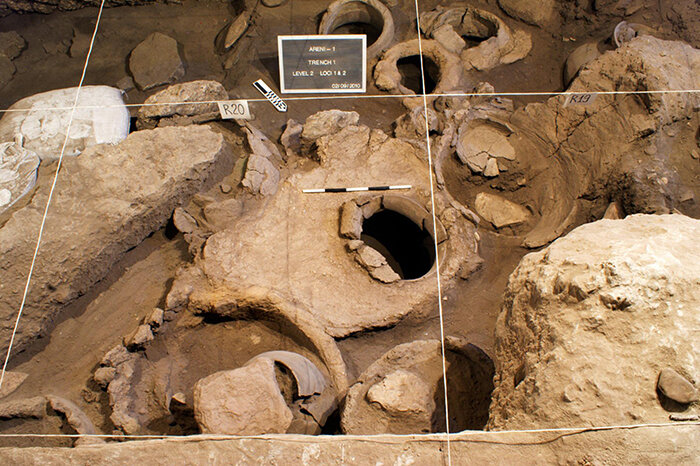 Oh– for that birthday dinner, I had the opportunity to sip a red made entirely from areni noir, a wine that had a remarkable acidity and resembled black fruit. Sadly, I forgot to take a picture of the label. Lovely! Try one of these too, if you can.

The spread of winemaking through the Mediterranean

Meanwhile, as we pointed out in our fun facts article, we all know how the Romans and the Greeks were heavily linked to wine, dedicating the respective gods Bacchus and Dionysus to it.

However, did you know that who spread wine across the Mediterranean were actually the Phoenicians?

The Phoenicians cultivated grapes for winemaking and spread the word (and the liquid) before introducing it around 4500 BC to the ancient Greeks, who later inspired the Romans and their love for wine.

Almost needless to say, but… as the grapes that had been growing in the early winemaking areas were introduced to new areas during the expansion to the Mediterranean basin, they slowly mutated to survive the new climates. The rest is modern history!

That is why, when we talk about Old and new Worlds of winemaking, it’s always good to remind that the Old World is really not exclusively about Europe. Even China – which many call new or even new-new in terms of winemaking – has older traditions than basically all the others. Open your mind if you still hang on to the old narratives.

PS.: A while ago, we at Alti Wine Exchange have offered the best wine from the oldest known active winery in the world, in Germany: the Riesling Beerenauslese Kröv Steffensberg 2007, from Staffelter Hof – which is also one of the oldest companies in the world, dating as far as 862 AD. It’s certainly one of the best wines for investment out there. Don’t miss out, it’s still available on our marketplace!